Over the past 5 years, visual novels have been some of the most memorable experiences I’ve had in gaming. Sometimes they can thrill and capture your imagination, but sometimes they can feel like a drag to read. Keeping the gamer constantly engaged through storytelling only can be a difficult undertaking for these games. So how does 428: Shibuya Scramble fare in the sea of Japanese visual novels?

Being a visual novel, the storyline is the most important aspect of any game in this genre. Everything you read and do will directly revolve around the story, so it needs to be compelling if it wants the player to make it through to the end.

I can happily say that 428: Shibuya Scramble has an incredible storyline from start to finish! It has everything a visual novel needs- mystery, action, humour, and most important of all, the twists that shock you.

If you’re familiar with Japan, the Scramble Crossing (obviously in Shibuya) is the massive intersection known to be one of the busiest in the world. It’s this very intersection where many of the game’s memorable scenes take place, though you will be taken on a tour around the beautiful region.

The game’s story begins with the police trying to solve a kidnapping case. Maria Osawa has been kidnapped and the kidnappers have requested her twin sister Hitomi deliver the ransom money near the Scramble.

Once the money has been collected, the game’s story kicks right into gear and you’ll be taken on a wild ride that goes far beyond what you might initially think.

The more you learn about the kidnappers and their motives, the characters you meet, and the plot twists that happen along the way, all serve to build into quite an epic and eventful story that actually only takes place over the course of one day.

But it’s the unique storytelling that sets this game apart. Usually you play as one character and see things from their perspective. In 428: Shibuya Scramble, you’ll play as five very different characters, each with their own storylines that all intertwine with each other. I wish I could go on about the game’s story, but there’s no way I could ruin it for anyone, but there’s plenty of other things to cover with this game.

One thing I really appreciated was how the game’s dialogue just gets on with it. Some visual novels I’ve played can get a bit too ‘wordy’ can really drag on. With this game, that never seemed to be the case. Each line of dialogue was to-the-point, stayed relevant, and never rambled on like I’ve seen in other games. It was refreshing and really helps to keep you invested.

Beforehand I said the storyline is the most important part of any visual novel, but with this game, it’s the character that I’ll be remembering the most. This game has such strong cast of memorable characters, each different in their own way. As previously mentioned, their are five characters to play as you progress in the story.

Some characters are directly involved with the main story of the kidnapping case, while others are not related at all but choices you make can impact other character’s paths.

One of the first characters you play is Kano, one of the detectives assigned to this case. His story usually involves all the police work including chasing down suspects, and generally finding clues that help in solving the case. 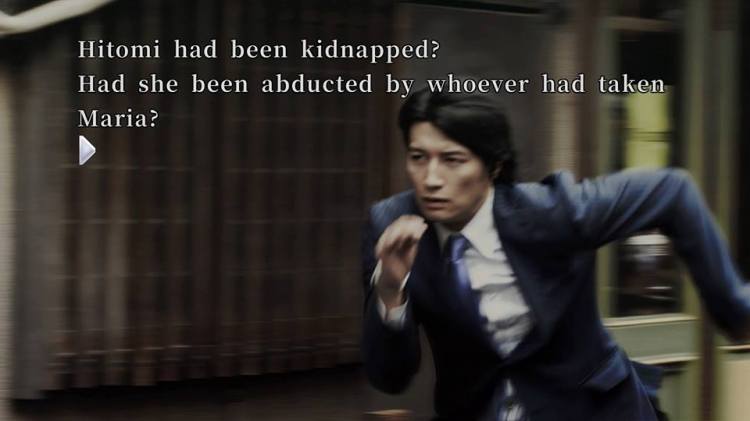 Then there’s Achi, a former gang member who accidentally gets himself involved when he tries to save Hitomi from harm. Throughout his story, he’s constantly on the run from the criminals and does everything he can to protect Hitomi. I enjoyed his story because you’ll see a natural bond form between the two characters.

Another important character you play as is Hitomi’s and Maria’s father- Kenji Osawa. His story sees him stuck at home for a lot of the game, as he has police and detectives in his house trying to uncover any information they can. You’ll be introduced to Detective Kajiwara here, an amusing character who seems to have never-ending supply of items (including bananas) in his pockets.

To take a bit of detour from the main story, you’ll get to play as Minorikawa, a fierce journalist who lets nothing get in his way of a good scoop. His story is wildly different from the others, as he has been tasked with writing multiple articles for a magazine publisher on its last legs.

Here, Minorikawa travels around Shibuya interviewing, investigating, and annoying everyone he can to write up the articles he needs within the one day. Strangely enough, his story feels the most hectic as you’ll feel his pressure to get his work done in such a short time-span.

Last but certainly not least, is the story of Tama, a poor girl stuck in a cat costume she wore for her job. She’s employed by the dodgy, but insanely hilarious, Yanagishita who’s current scheme is to sell a cheap, horrid ‘weight-loss’ drink at a much-inflated price.

Yanagishita is easily one of the most memorable characters in the game. His facial expressions, afro hairdo, lanky physique, and shady ideas all contribute to him being a character you’ll never forget.

What I love most about characters and their particular storylines is the distinct tone of each. When you play as Kenji, it’s a very grim and sad tone as you experience his grief of having his daughters and go missing.When you play as Achi, he’s always on the run with Hitomi from people trying to kill them. You really feel that urgency and Achi’s strong desire to keep Hitomi from harm.

Then on the opposite end of the spectrum, Tama’s storyline is the most light-hearted one that will provide many laughs. I always looked forward to playing as Tama because the rest of the game takes itself very seriously, so it’s nice to have some comic relief from it all.

So if you’re not actually familiar with the genre, the majority of the game is spent reading. Some games (like Danganronpa V3: Killing Harmony) will contain elements of gameplay to break up all the reading, while other games (like Stein’s Gate) contain no gameplay whatsoever.

428: Shibuya Scramble is mostly reading but the gameplay elements reside in the game. There’s a time flowchart that represents all the events that have happened so far. Rather than played in chapters, this game is played though each hour of the day, starting from 10:00am. In order to get to the next hour, you have to reach the end of each character’s hour.

But this game isn’t exactly played in linear fashion. You can’t just play through each character’s story to the end and move on. Each character’s story will, either directly or indirectly, intersect with each other. Throughout each hour, there’ll be moments where you have to make choices that will impact not just the current character, but other characters too.

If you make the wrong choice, you just may be hit with a ‘Bad End’, marking the end of that character’s story. Luckily you can go back and easily choose the another option and see how things turn out. This is where the game can get real fun, experimenting with different choices and seeing where the outcomes take you.

Though there is one criticism to some of the choices players can make, and that is that sometimes the choices make no difference whatsoever. When you make a certain choice, then try another one, sometimes the events and dialogue that follows is no different. Sometimes regardless of what you choose, the story just funnels into the correct one. This is a rare occurrence though and ultimately doesn’t dampen the experience too much.

If you do run into a ‘Bad End’ (and you will, there’s over 80 of them to witness), you’ll be given a hint on how to rectify it. It’s only until the final hours that you stop receiving these hints, but that actually hurts the momentum of the game, as you’ll constantly be replaying the same scenes over and over, and it slightly hurts its dramatic and climactic build to the end. Don’t get me wrong, the game still ends in a satisfying manner.

Thankfully for most of the game, you won’t have to replay much, as you can skip what you’ve already read. This keeps the pacing at a good level, as it helps keep you constantly engaged, which is a very important trait for any visual novel.

Apart from avoiding the bad endings, you’ll also come across ‘Keep Out’ sections, where you can’t progress a character’s story until you’ve reached a certain point in another character’s story. This helps avoid spoilers, and builds anticipation throughout each hour rather than just at the end. 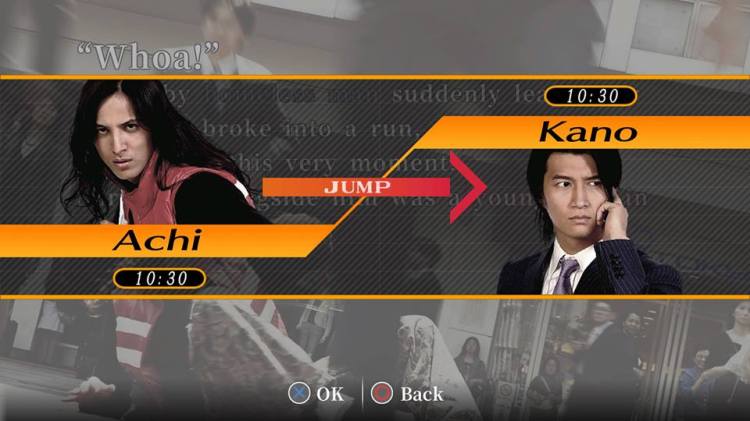 If you’ve never played a visual novel before, I couldn’t think of a better entry-point than 428: Shibuya Scramble. It has an amazing cast of characters that you’ll never forget. It has a fascinating story with some great twists and does a great job of constantly keeping you engaged.

Each character’s perspective and storyline are interesting in their own right, but still manage to intertwine seamlessly with one another. There’s a clear tone for each character and is brilliantly displayed with clever use of lighting and colour.

Even once you finish the story, there’s post-game content that unravels more about the characters. There’s one particular scenario that is one of the most heart-wrenching stories I’ve ever read through.

This doesn’t happen often, but I’ll actually miss this game and its characters now that I’ve finished it. When I think back over it all, I can’t help but be amazed by the adventure I had been on, and the memorable characters I met along the way. It’s for this reason (among many others) that I highly recommend this game whether or not you’ve experienced this genre before.