The Playstation 4 has given us an absolute smorgasbord of quality exclusives. From instant classics in Bloodbourne, Uncharted 4, Spiderman and God of War, we’ve really been spoilt for choice! But now another game, Days Gone, has joined the fray. A new open-world adventure with zombies seems to be a winning combination in this generation, but does Days Gone meet the high standard set by almost every other Playstation 4 exclusive?

The story of Days Gone is a familiar one. A story about a post-apocalyptic world filled with zombies, bandits, and just ordinary people trying to survive in the world. You play Deacon St. John, a biker who lost his wife in the opening moments of the game.

Deacon rides around with his buddy ‘Boozer’ as freelance bounty hunters with the goal of journeying north for better opportunities. Without giving too much away, the story involves a greater conspiracy involving the zombies (known as Freakers) and how they came about, helping Boozer recover from a serious attack, and searching for his wife who may potentially still be alive.

While there’s nothing wrong with the story, it’s a pretty standard story for this type of game, but it’s the way the story is told that truly lets it down. Days Gone features a ‘Storyline’ mechanic, where multiple storylines are happening throughout the game, and you play through missions that are linked to these storylines. Some missions are linked to multiple storylines and you’ll progress in these in just one mission. 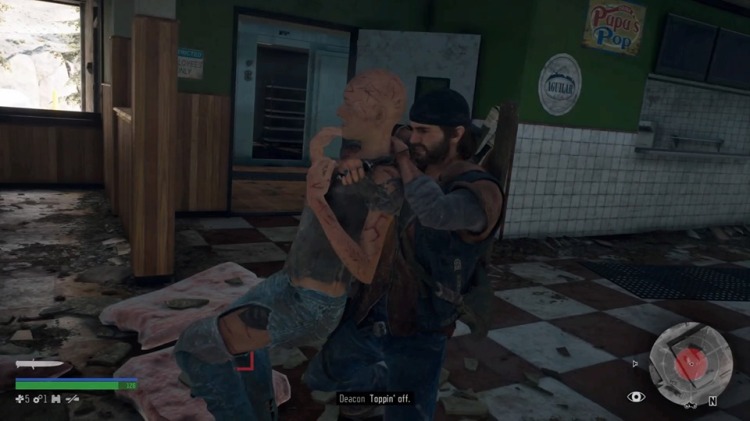 It may seem confusing but makes sense as you play the game more. I think the concept of it is fine but it just wasn’t executed very well. Also the pacing of the storytelling was way off too. You’ll be playing in one mission and progressing in its storyline, then afterwards you’ll do a completely different mission associated with a different storyline.

There’s just no flow to it all and that makes it hard to get invested. That fact was a major problem for me, I just never felt invested and engaged in the story at all because the game is constantly changing focus.

If that wasn’t bad enough, the missions themselves aren’t any better. Sometimes you set off to clear out some enemies, find an item in a town, or even just watch a cutscene and that’s it. They just weren’t very original and I’ve done those sorts of things before in many games. There were some stealth missions to break it all up, but you were still doing the same thing every time within those missions.

The main character, Deacon St. John, seems like your typical biker, but he does have a bit of a soft side. Most of the time, his voice acting is good, but there’s a part of him that puts me off. He seems just a bit unhinged at times, not in an exciting way, but in a confusing way more than anything.

For example, he’ll be listening to the radio, then next second he’s yelling angrily at it. I’m thinking to myself: “Chill Deacon, they can’t hear you”. Or when you bypass some Freaker nest he wants to burn and just becomes so angry about it.

It’s almost like the voice actor doesn’t know what emotion to act out, so he’ll just sound angry at random times. The other characters in the game are fine, but no one who’ll truly stick in my mind. I didn’t mind Boozer, but he didn’t make an appearance as much as he should have, considering how much of a role he played in the Deacon’s motivations.

Usually when a game’s story or characters aren’t a highlight of the game, the gameplay has to be what saves the game. I wish I had better news here. The gameplay overall does feel a little underdone, like just a bit more time could have been spent on it. Days Gone was a delayed release, so you would think it would have been a bit more refined.

The gunplay just doesn’t have the same level polish to be expected of a AAA third-person shooter. Aiming feels sluggish and melee just seems to be a better option in most cases. Even in melee, the camera makes it worse because the enemies move faster than the camera can keep up. Plus you can’t lock on which only adds to the problems. 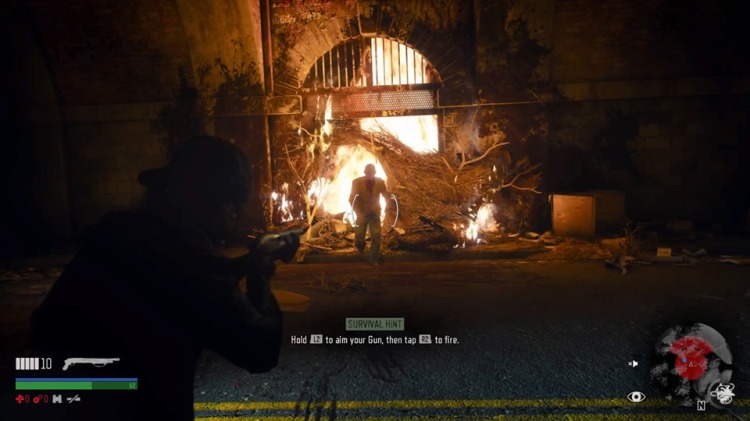 The best way to tackle most situations is through stealth because at least you don’t have to deal with the wonky gunplay and melee. Doing so also avoids you encountering the enemy AI which can laughable at times. Most of the time they seem like they’re lost sheep, and sadly I’m not even referring to the Freakers either

But I think the biggest offender is the game’s cover system, or lack of it. In most games that have cover systems, your character hugs the wall and the camera pans out to get a better view. This doesn’t necessarily happen here, as you can only really crouch behind cover, but you don’t really ‘stick’ to it. The camera pans out a little, whether it be up or to the side, but it doesn’t have that refinement that most games have. A decent cover system is a given nowadays with these types of games, but the unpolished state of this one feels inexcusable.

One of the major aspects of Days Gone is your motorbike which is necessary to get around the large map. Like with everything else, the bike’s controls also feel a little sluggish. Your bike also consumes fuel and it is one hungry bike! It really doesn’t take that long until your tank reaches empty, and it’s something you always have to be mindful of.

This is fine for the survival aspect of the game, but for the open-world aspect, it’s quite a pain. Having to always look for fuel canisters to fill up your tank just doesn’t go well with an open-world game because it prevents you from wanting to properly explore. I’ll admit it was very satisfying watching my fuel tank go from 0-100%, but I don’t think it really improves the experience much overall.

You bike can be upgraded to improve in areas such as speed and fuel capacity, but the upgrades feel a little limited. There’s just not a whole lot of upgrades there so why bother having it?

One of Days Gone main selling point are its Freakers and the hordes. I’d say this is probably the game’s highlight because stepping out of the comfort of the safe areas, and into the wilds where the Freakers roam, is probably one of the few times I felt something in this game.

It can be very terrifying and exhilarating when you’re discovered by some Freakers and a horde of them start chasing you. Once you run to your bike and ride away with hundreds chasing you, it’ll certainly be a moment you won’t forget.

But I think it’s strange that for the buildup to the release of this game, there was always such a focus on the Freakers, but it does feel like they’re placed in the world to act as an obstacle or nuisance. Yes, the story revolves around them, but they don’t seem to feature much through the main story, whereas it’s the Rippers and other bandits that take centre-stage.

To clarify, the Freakers do appear throughout the main story, but you would think it would be a whole lot more than what we got.

I feel like almost everything about Days Gone is just average, even sometimes below average. Aside from those very few encounters with the hordes, there’s not much else to write home about. The visuals and facial animations were quite good, but that’s almost a minimum requirement in modern gaming.

The story might be enough to get some people through, but the gameplay falls flat a lot of the time. There’s still a decent amount of things to do in the Days Gone open-world, but I can assure you you’ve done them all before.

Days Gone is by no means a terrible game, but it is just very average across the board, without giving anything that truly stands out.